You might’ve heard about political scientist and professor Charles Murray recently. He was the subject of a recent campus protest, and is also (in)famous for writing The Bell Curve. I picked up the most recent draft of his call for the creation of a universal basic income (“UBI”), In Our Hands: A Plan for Replacing the Welfare State.  As a person who relies on government welfare programs (e.g., Medicaid), I’m skeptical of most libertarian plans for reform. However, Murray and his book surprised me in a very positive way! 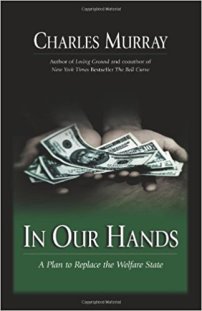 Unsurprisingly, Murray calls for the elimination of most wealth transfer programs, including Social Security, Medicare, Medicaid, and additional programs that may not initially come to mind when one thinks about welfare (e.g., farming subsidies). However, people – citizens, at least – will not be left completely without government support. Wealth transfer programs will be replaced by UBI. The figure Murray gives is $13,000 per year for each individual aged 21 and older (the amount can be proportionally reduced by up to $6,500, depending upon how much income a given citizen receives each year). Lest you think this is going to cost taxpayers even more than current welfare programs, Murray’s proposal is actually less costly than the status quo!

Unlike current programs that place in enormous restrictions on how each form of wealth transfer may be used, Murray’s UBI has at least $3,000 each year must be used to purchase catastrophic health insurance. This should please Democrats, in that all Americans would have healthcare. It should also please Republicans, in that catastrophic care truly is health insurance. Believe it or not, I am also impressed by Murray’s proposal because he states that long-term care would be included in the mandatory health insurance packages. People with severe disabilities in need of personal care assistance have been looking for a Medicaid alternative for years – could Murray’s UBI be it?

There is much more to discuss in this short book, and perhaps this blog will revisit some of the other benefits of UBI at a later time. I’m intrigued with the idea, and have been mulling over Murray’s proposal all week. Needless to say, this is definitely a book I recommend to anyone interested in government reform.  AEI-affiliated ideas strike again!