Yesterday I finished Ayelet Waldman’s A Really Good Day: How Microdosing Made a Mega Difference in My Mood, My Marriage, and My Life. Waldman, a former public defender, acquires a bottle of diluted LSD and studies its effect on her life. More rigorously, she provides daily updates in regard to influences – or a suspected influences – upon her mood, relationships, irritability, sleeplessness, productivity, and pain. 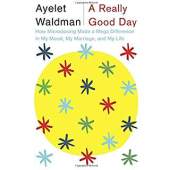 Waldman’s research is brave, in that LSD was categorized as a Schedule I drug by Congress and President Nixon in 1970. The Controlled Substances Act clamped down on legal access to the drug. It wasn’t until 1994 that the FDA gave approval for human testing regarding psychedelic drugs again. Yet, many are still reluctant to experiment with LSD, even if authorized to do so by the federal government and internal review boards.

The War on Drugs’ propaganda regarding LSD and other psychedelics is noted throughout the book, as is unfortunate consequences. Waldman considers, for example, that MDMA was regularly used by psychiatrists in the 1990s with very positive results. In one experiment, 83% of research subjects that obtained MDMA and talk therapy to resolve PTSD were cured after two sessions. The cure rate for those receiving a placebo? Only 25%. Importantly, the effects lasted long after MDMA was flushed from the subjects’ systems. Presumably, MDMA could be helpful to other PTSD sufferers, including veterans.

Certainly, Waldman notes that drugs are not without negatives. Although LSD has a remarkably low toxicity level, it occasionally led to sleeplessness and agitation. MDMA can indirectly lead to death, if people fail to take proper precautions. Nevertheless, Waldman astutely recognizes that even SSRIs (prescribed to approximately 10% of those in the United States) are not without risks. But not for the law, why not experiment in order to learn more about whether certain Schedule I drugs may offer benefits that outweigh the risks – and the alternatives?

Aside from being uncomfortable about appearing to endorse Waldman’s illegal activity, I found the book fascinating, and even encouraging. No, I would not personally take illicit drugs, nor would I advise anyone to do so. Yet, I would ask that the federal government and researchers be more forthcoming regarding the positives of certain chemical substances and determine whether they could be used for the benefit of those who suffer.