I’ve read a bunch of books since my last review, but none of them lent themselves to a review on this website. This afternoon, I finished reading Sharyl Attkisson’s The Smear: How Shady Political Operatives and Fake News Control What You See, What You Think, and How You Vote. (Yes, long title, long book. But one worth reading.) Anyone who is concerned with the declining state of American media – which should, presumably, be everyone – should read this book for a behind-the-scenes account of transactional journalism, super PACs, and the smear. 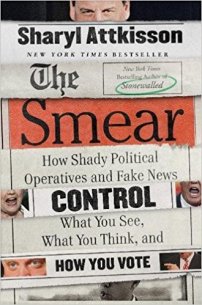 Attkisson is an Emmy award-winning journalist, frustrated with how the media has become a unit of propaganda. One day, a couple of congressional staffers approached  her with dirt on their opponent. Attkisson was a disgusted:

I let the thought swirl around in my head. These men are being paid tax dollars to supposedly serve the public interest working for a member of Congress. Instead, they are using time on the clock to smear political enemies.

But this is the status quo in contemporary Washington, D.C.

Working with friendly journalists isn’t the only tactic used by those wanting to discredit an enemy.  The Internet is also a powerful propaganda tool. Attkisson describes a tactic known as “astroturfing,” which allows PR firms, nonprofits, and anyone else to sway public opinion anonymously online. Entities can create hundreds of anonymous online profiles to make it appear that there is grassroots support when none truly exists.

Perhaps most disturbingly, Attkisson documents how Democrats attempted an astroturfing campaign against “fake news.” At the time, Media Matters and President Obama were proclaiming citizens were deeply concerned about the onslaught of fake news, and that something must be done about it. Both Obama and Media Matters trainees called for websites, including Google and Facebook, to curate news. The problems? The American public is not calling out for the First Amendment to be restricted; surveys do not support that fake news is one of the biggest concerns of the American electorate. Media matters and Obama are overselling the threat of fake media, as perceived by Americans at large. The second concern is that, to solve the “threat” of fake media, Obama and Media Matters are calling upon Google, Facebook, and other companies to curate news. Such a “solution” leads to serious concerns about censorship and protection of the First Amendment. (Although Democrats’ plans fizzled when Trump co-opted the term “fake media,” it is still deeply worrisome that Google and Facebook may curate news to the advantage of a singular ideology.)

My biggest critique of this book is that it focuses almost exclusively on the 2016 election. I realize Attkisson is a political reporter, but it would be interesting to see how the smear affects those outside of politics, if at all.Anyway, if you are a propagandist in the making, are a journalist, or have an interest in learning about how the powerful are trying to manipulate you, check out The Smear.